Results: We screened 1435 infants; 1137 did not meet inclusion criteria, 48 refused, and 150 were randomized (75 to placebo/75 to TMP) Four patients withdrew, leaving 146 for analysis. Baseline characteristics were equally distributed between groups (Table 1). Overall fUTI  rate was 6% (9/146), with eight events in the placebo group vs. one (TMP-resistant bacteria) in the intervention group (11% vs.1.4%; p=0.03). Eight fUTIs occurred in uncircumcised males and one in a female. NRPM infants had a significantly higher fUTI rate vs. UPJO-like (14% vs.3; p=0.02). Median time to fUTI was three months (Figs. 1A, 1B). Multidrug resistance was higher in placebo vs. intervention patients (42% vs. 22%; p=non-significant). Overall number needed to treat (NNT) was 10 and NNT for NRPM was four.

Conclusions: Patients with SFUIII/IV-PHN receiving placebo were 10 times more likely to develop a fUTI than those on TMP. CAP should be offered to uncircumcised males and those with dilated ureters due to their higher risk of fUTI. 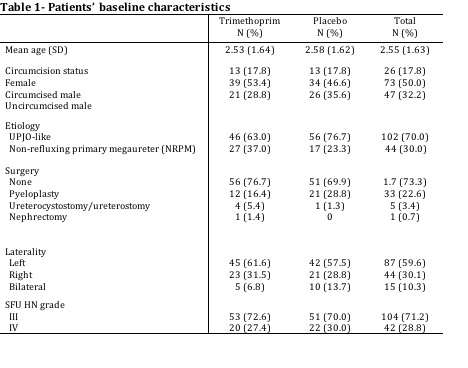